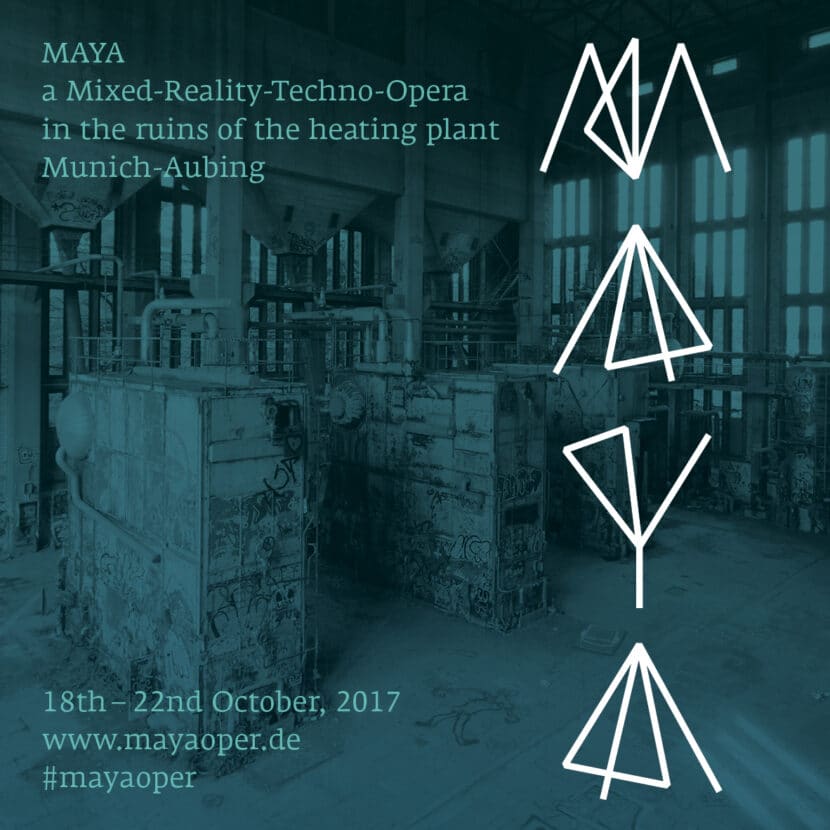 How Mathis Nitschke managed to get an audience for an independent experimental music-theatre piece and enjoyed applying creative entrepreneurial strategies to a publicly funded art project. A report by the creator.
Info about “MAYA”:  https://mathis-nitschke.com/en/maya/

I’m a music composer and theatre director, working freelance for more than 20 years. I’m used to not leave my success to random effect. For example, I learned the hard way that it doesn’t help hoping for the work of a PR agent. It’s much more effective to offer content which journalists will want to write about by themselves.

Some years ago I started combining my interest in music theatre and opera with my love and curiosity for new technologies. After successfully experimenting with GPS-sensitive smartphone apps to replay and adapt music depending on the user’s location (“Vergehen”), I dived into the world of Virtual and Augmented Reality.

The appearance of the ruin of the former heating plant in Munich-Aubing into my life led to what is today known as the world’s first Mixed-Reality opera “MAYA” (2017), an endeavor – despite its public funding – I had to produce in an entrepreneurial fashion. Why? Because the production turned out to be much more costly than the under normal circumstances very prosperous money I had acquired through public arts funding (ca. 119.000 EUR, funders below). Quite soon I had to realize that some 24.000 EUR were missing. This missing budget had to be funded through ticket sales and was entirely on my own personal risk.

Usually these kind of independent theatre projects are not really counting on ticket sales, having an audience of 50-100 people per show. In my situation I suddenly had to sell a minimum of 1.200 tickets over 5 shows to just break even. No one believed that this would be even remotely possible, especially as the location is way off the city center.

To acquire 1.200 people for an independent experimental music-theatre project you have to go way beyond the known audience. You have to reach a new audience. I loved that aspect.

To acquire 1.200 people for an independent experimental music-theatre project you have to go way beyond the known audience. You have to reach a new audience. I loved that aspect.

First measure I took was to found the liability limited Sofilab UG to minimize private risk. It seemed totally feasible that I might need to cancel shows for unexpected security reasons. This would have led to the unfortunate situation that I not only wouldn’t have received income from ticket sales but would have been obliged to pay back the funding money which would have been already spent by then.

Sofilab UG functioned as the producer of “MAYA”, hiring me as the composer, director, project leader and managing director. I also took over the positions of the PR agent and bookkeeper. I led a team of 14 artists and 15 technicians and coordinated several service and business partners.

One of the most important decisions was the product design itself: we knew that the actual feature of interest would not be my music or the fantastic singer Martina Koppelstetter or whatever usually put on top but the promise to experience something very unusual and unique in a highly special location: the last industrial ruin of Munich. Its existence is super-unexpected in this gentrified city. So both in the piece itself as well as in the communication material (designed by Anja Gerscher) the ruin became the main actor. Instead of mere information and advertising, we used the flyer to draw people into the storyworld right away (see pdf: MAYA_Flyer_PRINT). On the poster (pdf: MAYA_Plakat_PRINT) we combined a photo of the location with the title “MAYA” and the hint “Mixed-Reality-Techno-Opera”. That’s it, no names, not mine nor any.

Sure, it was not only the location. We combined the rotten location with super-geeky Augmented Reality technology on the audience smartphones, mixed classical opera with electronic music and framed all that by a dystopian science-fiction story. In a way we behaved like teens bringing together all their favorite toys and gadgets. An anarchic quality which was important to the energy of the whole artistic development, a positive energy which could also be felt from outside.

This unique combination of features was the reason why the newspapers were keen writing about it, without me needing to call or beg them. The project received whole-page articles with multiple pictures already long before the premiere, generating further interest from even more media writing more about it. The last article by Süddeutsche Zeitung on the day before the premiere even made it onto the news screens in the subway trains and stations, reaching tens of thousands of people.

On social media I drove a long-term strategy. Already months before the shows I started paying for sponsored posts, continuously but on a low level. Over time, I experimented with targeting so I reached a wide variety of people. The post didn’t feel like heavy advertising and showed a video teaser (by Felix Hentschel) which made people curious. It was liked, commented and shared. On my artist pages I shared insights into the process of the development, wrote blog articles and sent editorial content through my newsletter. All in all I spent only a few hundred Euros on social media advertising but acquired a major part of the audience through it.

We set ticket prices higher than a regular cinema visit but lower than high-profile concerts. We wanted people to feel that this will be something special but still something accessible. Ticket prices were set to 25 EUR and 15 EUR for students and children.

One of the reasons why I love working with private partners outside the concert hall is that you reach an unexpected audience right away. I performed in pharmacies, shopping halls, travel agencies and art museums, all of them bringing their audience into the project. In this case the ruin is owned by Allguth GmbH, a local petrol company operating 30 filling stations in the region of Munich. Next to allowing me to use their ruin, they agreed to let me use their gas stations for advertising, hanging posters in the windows and leaving flyers on their bistro tables. Thousands of contact points per day for free.

Cost control doesn’t need to be accompanied by restrictions.

Cost control doesn’t need to be accompanied by restrictions. I succeeded in creating partnerships that were not only mutually beneficial but also represented measures to develop the audience. For example, manual work had to be done to secure the ruin. In the village of Aubing is located a local chapter of the Technisches Hilfswerk THW (Technical Relief Agency). The handicraft work to be done is part of their duties and they were interested in using the ruin as a training center for their youth department. The training day brought them some adventurous experiences, I got free emergency exit doors and it spread our project among the local youth.

On a similar level I created partnership with a new bar which opened about the same time of our shows. They used our audience for advertising their new bar and we got hip and tasty drinks. And their audience!

One of the main multipliers was not exactly intended but very welcomed. Our idea to use an AR app came from our early observation that whenever anyone entered the building he or she would pull out his or her smartphone to make photos. Through our AR app (created by Klasien van de Zandschulp and Luciano Pinna) we encouraged the audience members even more to use their smartphones rather than putting them away. As the location was hugely “instagrammable” that behavior led to a huge wash of social posts. Together with word of mouth the audience was growing so quickly from show to show that we had to send people home because we were sold out from the 3rd show on.

I’m really proud that I reached and actually wowed these people with art which is usually connected to a niche audience.

In the end I sold more than 1.500 tickets. Our audience consisted of all ages and a wide mix of interests. In fact, I strongly believe that half the audience usually wouldn’t go to the theatres or even operas. I’m really proud that I reached and actually wowed these people with art which is usually connected to a niche audience.

We could have played even more shows if it would have been technically possible. I took a great personal risk but succeeded. The success results from some right decisions, a super-motivated team, happy circumstances and pure luck.

It took a year until my nervous system became relaxed again. But I so much would do it again. And I secretly am already.

MAYA was supported by the Cultural Department of the City of Munich, the German Federal Government’s Performing Arts Fund (Fonds Daku) and the creative industries fund The Netherlands. Kindly supported by the Kingdom of the Netherlands and the Bezirksausschuss 22 Aubing – Lochhausen – Langwied. Thanks to Allguth GmbH.